Kidepo National Park is one of the remotes parks in Uganda with abundant wildlife species in one go. This is why Kidepo National Park was named among the best safari parks in Africa by CNN Travel and recommended for best safari. With a true wilderness feel, kidepo Valley is a true destination for adventurous people since it offers you virgin or untapped ecosystem. The sparkling beauty of Kidepo Valley and Narus Valley over shadowed by the magnificent Mount Morungole provide scenic beauty for the park. Kidepo valley National park is endowed with diverse savannah fauna of all the parks in Uganda.

How to get to Kidepo Valley National Park

The park is approximately 700 kms from Kampala city and can be accessed through two routes in Uganda below are the different transportation ways.

The is the popular transportation to the park since it takes about 10 hours to reach the park by road. The air transportation is operated by a few companies that is Aero link, Eagle Air and fly Uganda. There are always 3 flights that takes 2 hours to Kidepo from Entebbe international airport at 12:00 pm- 13:00 pm by Aero link to Kidepo Air strip.  Air transport fees depend on whether you are using a scheduled craft or chartering one for your group.

This is the least type of transportation to the park and it will take you approximately 10 (Ten) hours from Kampala city via Gulu road to Lokumoit Gate. The second route is through Kitugum road to Nataba gate from Kampala city. The roads are in good condition but as you get closer to the park, the roads are Marram and you may experience the African Massage. We recommend tourists who can’t manage to travel longer distances to make stopovers in Gulu and Kitugum town.

Karamoja is now safe and no banditry happens there any more therefore the road transportation has become popular as means of transport to Kidepo. We recommend you use a 4×4 Vehicle and this ranges from Us dollars $200-$350 per day minus drivers’ allowance.

What to do or Attractions in the Park?

The equatorial climate in Kidepo National Park has blessed it with quite a number of attractions from wildlife to waterfalls that are all found in one place.

The park also is home to two rare nocturnal that is Pottos and Bushbabies.

Game drives offer tourists incredible sights for wildlife and they start at 6:30 am (morning), 3 pm (Afternoon) and 6:30 pm (Night drive) every day.

The game drive is done using the 4×4 vehicles which you can hire in the nearby towns or use a tour operator to organize the activity for you.

Kidepo Valley N. P is an amazing bird watching site with 450 recorded bird species and 60 spiece of those not recorded anywhere in Uganda.

This offers tourists a chance to roam in the park during dry spells spotting the different gem which resides in the park.

Exploring the wilderness as you discover and hold the beauty of Uganda within your hands.

The Borassus palm trees is a delicacy for the local people as well as elephants and the trees are scattered all through the valley.

This is the centre of tourism in Kidepo valley and thousands of wildlife gather to drink up at the river as well as cool off.

This is also a water point for the Karamoja people as they roam in the region for water and pasture for their livestock.

It also makes wildlife sighting very easy since it takes you to sacred spots that make wildlife.

You will sight lions, buffaloes, zebras, cheetah, leopard, hartebeests, waterbucks and the birdlife

The time of visit varies depending on the season that’s wet or dry, however, Kidepo Valley National Park is open all year long.

The best months to see volumes of wildlife is the dry seasons of December- February and June- September.

The best time for birdwatching is March- September and Migratory bird watching in November-April.

The wet seasons are March, April, May and November with higher rains that cause delays due to passable roads and wildlife encounters.

However, due to global warming, there has been a change in the rainfall patterns therefore this can change year after year.

Activities or Things to do in Kidepo Valley National Park

The game drives are divided into two is days and night drives.

They start early in the morning at 06:00 am to 6:00 pm East African time for a day game drives in the park.

The night game drives in search of nocturnal start at 6:30 pm- 11 pm with the view of the sunset and accompanied by an armed ranger guide.

They are conducted in open rooftop vehicles of 4×4 and open-sided vehicles to enable you to take great pictures during your safari.

You will see animals ranging from the big five to African hunting Dog, leopard, Bat Eared Fox, large herds of antelopes and Zebras.

Night game drives are always booked in advance since you should be assigned a ranger and you will be required to pay an extra fee which ranges from $30- $100 for a trip.

Kidepo Valley N. P has a beautiful ecosystem that attracts a variety of bird species.

The park offers huge numbers of birds with over 470 species which are sighted along with the forests as well as the lake shores of the park.

For bird lovers, the bird watching activity is done in the Kidepo and Narus valleys and the salt lick and forest.

Kidepo Valley N. P offers you a chance to move out of your vehicle and stretch your legs for either a short or long walk during your safari.

These walks are conducted by the park rangers either inside or outside the park during the daytime.

The walks inside the park will aim at tracking and getting closer to animals as your guide takes you through the different animal behaviours on the Apoka trail, Kidepo trail as well as Narus trail.

The walks outside the park take you to experience the cultural encounters with the Ik community and the Karamojong’s.

These walks take approximately 2 hours and offer you sights of different wildlife and bird watching.

Where to stay in Kidepo Park?

There are a few places to stay while on your Kidepo Valley National Park trip and the common type is camping.

For your planning purposes, you can visit the park for three (3) or multiple days depending on your budget.

Furthermore, cross border safaris can be added in Rwanda like Akagera, Nyungwe, Kivu and Volcanoes N.P. In Kenya don’t forget to add on the Masai Mara for the wildebeest and Amboseli for the big five.

These combinations will just add a slice to your safari as you touch each of the EastAfrican countries.

In conclusion, Kidepo Valley National Park will offer you a chance to see plenty of all wildlife found in Uganda’s Parks.

Forever Africa Safari offers a variety of gorilla trekking safari options at unbeatable rates. Contact us for the best rates at info@foreverafricasafari.com or call us /WhatsApp us +256 772 221 880 to start planning your safari/tour today!

Tracking the mountain gorillas of Uganda’s Bwindi Impenetrable Forest is the highlight of this short weekend African jungle safari that starts and ends in Entebbe, Uganda.

Safari Type: Custom Made
For Who: Not for children
Start/End: Entebbe, Uganda 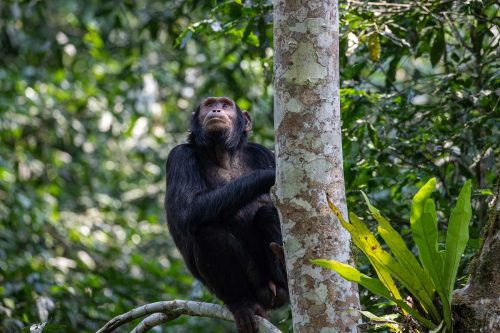 Hike deep inside Uganda’s rain forest floor and follow a band of chimpanzees going on their daily foraging monkey business.

Safari Type: Short Custom Made
For Who: Not for kids
Start/End: Entebbe, Uganda